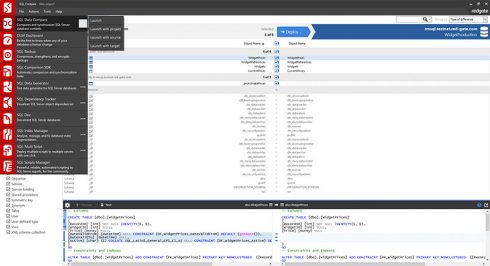 “The SQL Toolbelt offers users 15 database development tools in one installer, and all of those tools themselves are under constant development,” said Julia Hayward, technical lead for the SQL Toolbelt. “When new features are introduced, we want the update process to be as simple as possible so that individual users as well as big teams can take advantage of them as soon as possible.”

“Software development is increasingly important for automotive applications. Progressively demanding safety, environmental, and convenience requirements have sharply increased the number of electronic systems found in vehicles,” said Paul Blundell, CEO of PRQA. “We are delighted to offer a tool to help the automotive ecosystem comply with the AUTOSAR Coding Guidelines.”

Google changes the way APIs are structured in the latest version of Google Play Services SDK
Google has released a new version of the Google Play Services SDK, which features a significant change to the way the APIs are structured. The change to the APIs will make them easier to use and more memory efficient, according to the company. It will use the Task model, which was first introduced in Firebase, to separate developer activity from asynchronous results of the APIs. Google also updated the Android Basic Samples project and Client Server Skeleton project to use the Play Services API.

There are three changes that developers will need to make to account for these changes. First, the authentication method has changed and is now done explicitly through the Google Sign-In client. Second, all Games.category static method calls need to be switched to use the API client methods. Finally, inviting other players will now be done using a turn-based and real-time multiplayer API client.