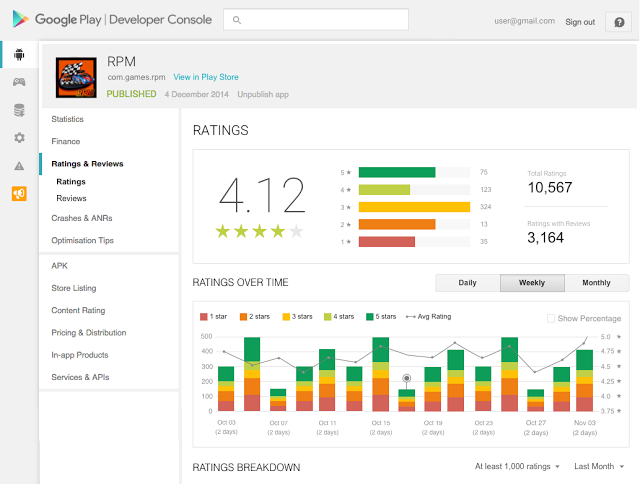 Google is revamping its ratings and reviews on Google Play to help developers engage and understand their users.

“In the last few months, we’ve made a number of improvements in the Google Play Developer Console to help you better analyze and manage ratings and reviews so that you can improve your app experience and boost its rating,” wrote Fergus Hurley, product manager at Google Play, in a blog post.

Microsoft kills Windows Bridge for Android
Microsoft is dismissing project Astoria, its porting tool designed to bring Android to Windows. The company has decided to instead focus its efforts on the Windows Bridge for iOS, and make that the single option for bringing mobile code to Windows 10 devices.

The news follows Microsoft’s recent acquisition of Xamarin. The company is encouraging any developer who invested time in the Android Bridge to consider the iOS Bridge or Xamarin.

Spotify’s free software projects
Spotify recently announced it is going to be moving its new system on the Google Cloud, and while it makes the transition, it will be documenting the journey with a series of blog posts on Spotify Labs. Additionally, Spotify has open-sourced code on GitHub.

Building the Spotify service was made possible with free and open-source software. It has a complete list of open-source projects it has released to the community. For a full list of those projects, contributors can check out its GitHub page. They include Java, JavaScript, Objective-C, Python, Ruby, and projects like Kafka (and ZooKeeper) in Docker, software to run automated repairs of Cassandra, and tools for writing Java Native Interface code.

Another project Spotify released on GitHub is for capturing meaningful metrics in a Java application. The project contains modifications to the Dropwizard metrics project, and its primary additions include a replacement for MetricRegistry, allowing for metric names containing tags through Metricld.

A full list of Spotify’s open-source projects can be found here.