In the case of public cloud, Microsoft is fighting it out with deep-pocketed giants like Amazon and Google, meaning the fight will most likely be long and fierce.

The versatility of Azure
Vishwas Lele, CTO of Applied Information Sciences (and an Azure MVP), talked about the versatility of Azure’s offerings. “In addition to the typical scale, cost and the agility benefits, Azure offers a breadth of services from Platform-as-a-Service to Infrastructure-as-a-Service and the ability to mix the two; cloud native apps to cloud hybrid apps (on-premise connectivity); and a growing array of app services from Media Services, AD Premium, to most recently Machine Learning,” he said.

Machine Learning is new and an example of what it means when we say that Microsoft is surrounding other cloud providers. It would appear that the influence of Microsoft Research helped get the Machine Learning capability into Azure. The Web-based ML Studio (see Figure 1) walks the subject-matter expert through developing the models and uploading the data sets required for the Machine Learning implementation. There is even a tutorial with data that walks you through detecting credit-card fraud, which is one of the first widely applied commercial applications of Machine Learning. 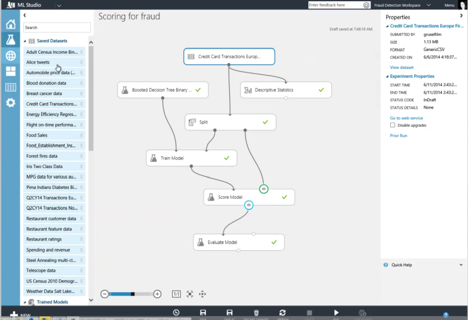 By this time next year, you can expect a great deal of the semantic Web to be running on Azure due to this new service. Semantic Web is hailed as Web 3.0, where systems like Siri and Microsoft’s voice assistant software Cortana anticipate needs and actions based on the situation, circumstances, preferences and all the other things a really good friend or first-class personal assistant would use to make your life better in the moment. If other cloud providers do not build something comparable, then Azure is the clear choice for any startup that wants to provide semantic Web experiences but does not want to reinvent the wheel in terms of machine learning systems and supporting components.

Cloud type choices
Private cloud is one use of the term that is adding confusing across both the IT space and for developers. For almost every organization on the planet, a private cloud is just a rebranding of corporate IT.

It might represent better run and aggressively consolidated data centers, but if everything runs on your own hardware, it is like running generators for all your electricity and claiming that you benefit from the grid. In this way private cloud is at best an attempt to spin the use of the term while resisting the forces that make the cloud so attractive.

Hybrid cloud is another term that is much more important for developers, because unlike private cloud, it provides a path toward adoption without as much risk of dying from the transition. Hybrid cloud for Azure means having some servers and systems on-premises, and under the watchful eye of your own IT organization working seamlessly with Azure-based systems and services. These on-premises servers would run Windows Server 2012 R2, which specifically supports this integration across the Web. Hybrid scenarios include Web servers in Azure having access to on-premise databases and VMs hosted on Azure being members of the on-premise domain.

In an open letter to the staff at Microsoft, CEO Satya Nadella said, “The combination of Azure and Windows Server makes us the only company with a public, private and hybrid cloud platform that can power modern business.”