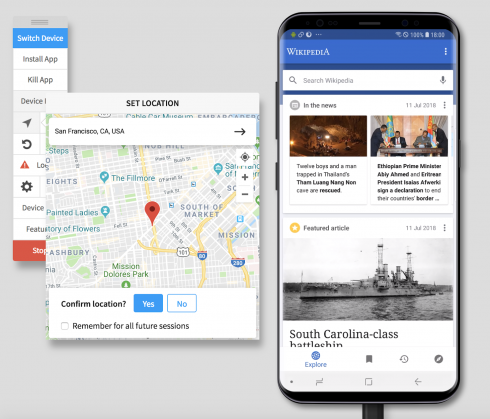 BrowserStack is announcing new debugging tools and native mobile functionalities to its web and mobile app testing platform. In addition, the company announced it is adding new devices to its Real Device Cloud coverage with support for Samsung Galaxy S9, S9+ and the 2018 Apple iPad. Support for iPhone 6, 6s, 6s Plus and 2018 Apple iPad, Video-Log Sync, App Profiling, Google Pay and Google Play Billing will all be available in Q3, BrowserStack said.

The new debugging tools include:

Apple speeds up MacBook Pro
Apple today announced an update to the MacBook Pro with faster performance and new pro features. According to the company, developers can now compile code faster than before and run multiple VMs and test environments. Updates include Touch Bar, a 70 percent performance increase, support for 32GB of memory, a True Tone display and a quieter keyboard for typing.

“The latest generation MacBook Pro is the fastest and most powerful notebook we’ve ever made,” said Philip Schiller, Apple’s senior vice president of worldwide marketing. “Now with 8th-generation 6-core processors, up to 32GB of system memory, up to 4TB of super fast SSD storage, new True Tone technology in its Retina display and Touch Bar, the Apple T2 chip for enhanced security and a third-generation quieter keyboard packed into its thin and light aluminum design with all-day battery life, it’s the best notebook for pro users.”

“Organizations continue to move their data analytics to the cloud at an increasing pace, with the cloud data warehouse at the core of their strategy. Customer demand for an Azure-based data warehouse is also on the rise. We’re working with Microsoft to provide the performance, concurrency and flexibility that Azure customers require from a modern, cloud-built data warehouse,” said Bob Muglia, CEO of Snowflake.

According to the company, the library derived from the .NET Core team as it tried to improve the web server Kestrel. The work started out as a implementation inside of Kestrel and turned into a re-usable API for .NET developers now known as System.IO.Pipelines.

“Correctly parsing data from a stream or socket is dominated by boilerplate code and has many corner cases, leading to complex code that is difficult to maintain,” David Fowler, principal software architect for Microsoft, wote in a post. “Achieving high performance and being correct, while also dealing with this complexity is difficult. Pipelines aims to solve this complexity.”

Morse code now available on Google’s Gboard
Google announced it has partnered with developer Tania Finlayson to bring Morse code to Gboard for iOS as well as improve Morse code for Android. In addition, the company released an Android, iOS and desktop game to help users learn how to type in Morse Code.

“I’m excited to see what people will build that integrates with Morse code—whether it’s a keyboard like Gboard, a game, or educational app, the possibilities are endless. Most technology today is designed for the mass market. Unfortunately, this can mean that people with disabilities can be left behind. Developing communication tools like this is important, because for many people, it simply makes life livable,” Finlayson wrote in a Google blog post.